Sapien have just released some great PowerShell tools, if you have not tried their tools before I suggest you head over to their site and make use of their free trials before making your mind up for yourself, i for one could not be without the form editor.

They have recently released the 2011 versions of:

A fantastic script editor supporting over 50 languages with syntax colouring, brace matching, code folding and a large number of enhanced features, this editor has everything you need including the following features: 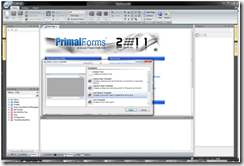