Looks like Ms has done a slight u-turn over public folders,
ever since I’ve known they have been planning to “remove” or “de-emphasise” public folders in the next version of Exchange, they attempted this in Exchange 2007, but demand (and development timescales) meant they reintroduced a lot of the management tools via SP1.
Now via a statement made in passing it looks like they are still planning support!

Public Folders and E14 – The Next Version of Exchange
Just like a certain segment of the blogosphere is concerned about Windows versions and gets excited every time a notice about “Windows 7” (the succeeding product to Windows Vista and Windows Server 2008) comes out of Redmond, I follow, instead the segment that gets excited about E14 – the next release of Exchange Server.
At this point, I would say that we probably know less about E14 than we do about Windows 7!
One of the MAJOR issues that came out of E12 (Exchange Server 2007) was that Microsoft chose to de-emphasize Public Folders. What this means is that they said they would support public folders for E12, but would not guarantee that they would be supported in releases after E12, nor would additional feature content be added to Public Folders.
Microsoft’s stated direction for public folders is the SharePoint product suite. Which, while it does a GREAT job at some things (document libraries come to mind) does poorly at other things (threaded conversations) and does not do some things at all (replication of content to many sites).
Well, in a conversation today it came out that Microsoft will support public folders in E14. Many of us were shocked, surprised, and very happy! The Microsofties in the conversation were surprised that we were surprised – they said that they had told us this ‘way back in 2006! They pointed to this blog post by Scott Schnoll from June of 2006.
Well, now we know! I’m sure we’ll hear more about this Real Soon Now ™. 🙂

Thanks to Mark Blake for bringing this to my attention:

The latest beta version of Ubuntu 8.04 has a new version of Wubi an application that allows you to install Ubuntu under Windows as a disk image to which you can boot, no partitioning needed. 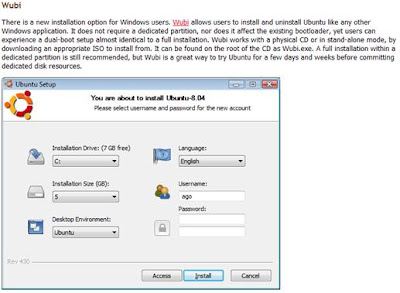 VMware researcher Oded Horovitz got an earful when he told a group of security buffs his company’s virtualization software was theoretically impenetrable. Speaking at the CanSecWest conference in Vancouver, his hour-long presentation, titled Virtually Secure, included a slide titled “VM Escape” that carried the following bullet point:

“Though impossible by design, the hypervisor can still have implementation vulnerabilities.”

It was more than some attendees could bear.

To learn more and to read the entire article please refer to the rest of the article at its source: How safe is VMware’s hypervisor?

The VMware Certified Design Engineer certification will be available later this year. The certification involved taking several courses and exams, including:

Once all of this has been completed the candidate must present a defensible design to a panel of VMware Solution Architects for consideration. As you may guess, this is a certification specifically targeted for VMware partners that will be assisting VMware in design and deployment and is only intended for a relatively small audience. That being said, the Enterprise Exam, which has a number of live lab style questions, should be available to the public in the next few months and may become part of a mid-line certification between VCP on VI3 and VCDX. That is also under consideration.

Compare the user experience of XenDesktop to VMWare VDI over several different WAN links and latencies. The wan is simulated with Shunra VE Desktop.

I have argued and spoken to many people on this subject and the following website just adds to my Pro virtualisation of Citrix, especially when using VMWare and all its memory sharing technologies.