Recently with vSphere 5 VMware enabled you to deploy the ESXi image via PXE boot to your hosts, to do this you need some PowerCLI knowledge.  Now just because I find PowerCLI easy to use and a great product it doesn’t mean the next person will.

Luckily PowerGUI gave us a great way to add an MMC style interface back on top of the cmdlets, this is called a Powerpack.

The Powerpack contains a variety of scripts which will allow you to harness the power of custom ESXi images and stateless deployment.

In order to use this Powerpack you will need the following:

Here is a short video which shows you the basics of how to import the Powerpack and how to use it.

To see how to import a Powerpack and how to make sure you always have the latest version check this post here: http://www.virtu-al.net/2009/10/29/vesi-powergui-powerpack-management/

Please add comments to this post if something doesn’t work or you have any ideas on how to make it better – remember this is an initial release ! 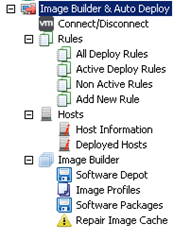