The VMware Community PowerPack is a community driven project which enables us as VMware admins to share our day to day problems and fixes through the format of scripts with a nice GUI front end making it even easier for us all to help each other out as at the end of the day we are all managing the same systems and probably hitting some of the same issues or requests for information.

The PowerPack contains a variety of scripts from Virtu-al.net and now other blogs such as ict-freak.nl, van-lieshout.com and ntpro.nl transformed and enhanced into a useful PowerPack for PowerGUI. 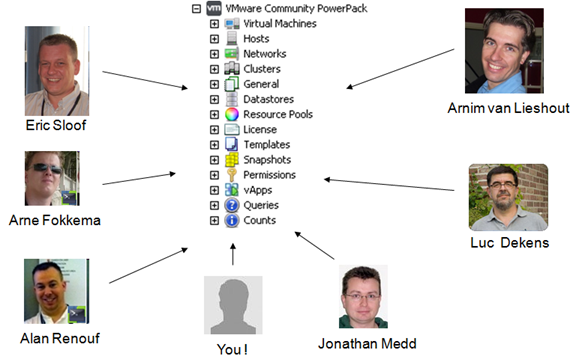 In order to use this PowerPack you will need the following:

Here is a short video I shot a while back of me installing the Virtu-Al PowerPack, the process is pretty similar if you use PowerGUI or vEcoShell but you will not need to download the VMware PowerPack if you use vEcoShell as it is built in….

To see how to import a PowerPack and how to make sure you always have the latest version check this post here: http://www.virtu-al.net/2009/10/29/vesi-powergui-powerpack-management/

At the moment I am trying to come up with a better method but please do send any updates or additions you make over to me in an email, I will make sure these are added to the PowerPack.

If you have a good idea but do not know anything about PowerCLI then please add your idea as a comment to the bottom of this page where one of the frequent updaters will no doubt run with it !

Can I be notified of PowerPack updates ?

Why does the community PowerPack not have a connection method ?

You will need to connect using the connection through the original VMware PowerPack, this is a conscious decision as the intent is not to replicate the great work done as part of that PowerPack but purely to add functionality for every day VMware Information needed by consultants and VMware Admins.

When I click a node it says I am unconnected even though I made a connection ?