You may have noticed a distinct lack of posts from me recently, I have been on holiday, I had a great time staying in Belgium and The Netherlands, a fantastic country which I would recommend to anyone thinking about travelling in northern Europe, not just for the red lights or “space cakes” either !

Whilst preparing for my trip I heard that the famous “Dutch VMUG” was having a PowerCLI / VESI event, now I know I was on holiday but it would have been rude to pass within an hour of the area and not attend 😉  and I was glad I did.

Having presented at a few VMUGS now I was very impressed at how organised the Dutch VMUG members really are, the presentations were submitted before hand and everything was set for the date well in advance, there were some real superstars presenting too, Armin van Lieshout, Arne Fokkema and Viktor van den Berg.

The format was great, this was a beginners guide to firstly PowerShell and PowerCLI and then moving onto The Virtualization EcoShell, the great thing about it was that after each presentation there was a LAB, there were enough PC’s setup for the attendees to work in pairs and go through a pre-setup sheet, showing how what had just been presented really worked, in my opinion a great way of doing things as PowerShell and PowerCLI can be a hard thing to teach to beginners, present for too long and you end up using the Start-Sleep cmdlet without realising it.  This way the audience was kept captivated and wanting to learn more.

After the PowerShell and PowerCLI presentations and labs they then moved onto the VESI, starting with an insight into the future of the product and some kind words from Scott Herold, this can be watched below:

After the video there was an explanation of the VESI and another lab, this was then followed by Arne and I showing some tips and tricks on how to create your own PowerPack,  I was privileged to present with Arne who did a great job.

Hopefully we showed people not only how to create your own nodes and how to populate them with useful information but also some tips and tricks on how to best use the object orientated PowerShell language and VESI script editor and debugger.  We also mentioned a new project “The VMware Community PowerPack” which I will be posting more about in the coming days.

Some pictures of the VMUG can be seen here, courtesy of Viktor.

Personally, I would just like to say a massive thanks to Viktor, Vizioncore, XTG, the other organisers and presenters for letting an English guy crash the Dutch VMUG and also a massive thanks for all my goodies: 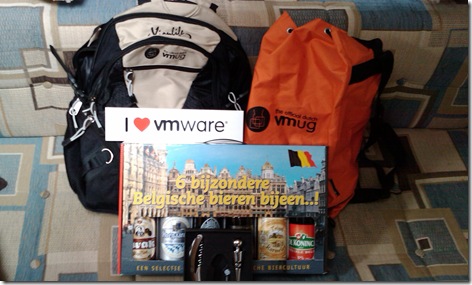