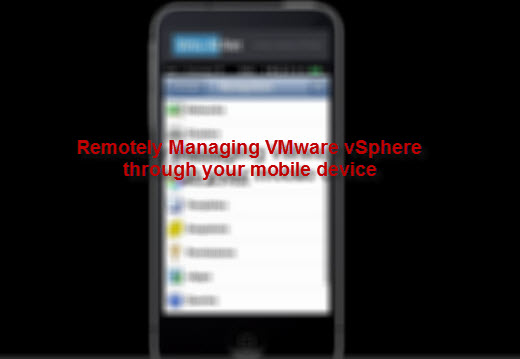 Remember the VMware Community PowerPack for PowerGUI? With it we were able to manage our VMware environment through a MMC style GUI placed on top of PowerCLI Scripts, this gave us the benefit of custom task based actions with a nice and easy to use interface.

Now Imagine if you could have the same great customized management options for your vSphere environment on a mobile device or tablet device.  Imagine no longer!

Mobile IT is a new application which is available on a number of different mobile devices and tablets that allows us to import Mobile Packs which are custom written packs that work with your applications and also Power Packs which were previously written for PowerGUI.

So What do I need?

The first thing you will need to do is setup the server which is going to run Mobile IT, this is where we have two options.  In a corporate environment you will probably want all connections to go straight to your systems and you will want to manage the traffic and every aspect of the environment, in this case you would have the Mobile IT Server in your DMZ and the Mobile IT Agent on your network as per the image below taken from the Mobile IT documentation.

The second option (which was perfect for my home lab) is where Dell hosts the gateway server for you, you can then install the Mobile IT Server and Agent on your network (I had them both on the same server) as per the below diagram taken from the Mobile IT documentation.

The Install was very easy and I had the system up and running in around 20 minutes, once setup it was easy to import the VMware Community Power Pack and add the same machine as a new instance in the web admin interface.  I also installed PowerCLI on this server which is needed by the Community PowerPack.

Now all you need to do is install the app on your phone or tablet, a client is available in the app store of each of the following devices and is currently free. Once downloaded and you have entered your company name and credentials it will communicate with your Mobile IT server where you can authorize the device for use on your network.

Check out the Mobile IT Site here for downloads and documentation.

See it in action

See it in action with the VMware Power Pack below and remember, this is all based on PowerCLI so you can customize the scripts and allow access to your tasks from any mobile device.

5 thoughts on “Remotely Managing VMware vSphere through your mobile device”