I was looking for a way to transfer some VM’s from a Linux VMware 2.0 server to a VMware ESX 3.5 server as fast as possible to minimise the amount of downtime.

As these files would need to be copied to a windows share first for the converter to import i started with WinSCP, when it told me it was going to take 5 hours I looked elsewhere, I have used the Free Veeam FastSCP program before and new that unfortunately I could not copy files from a Linux server to the local windows machine.

During the previous week I was made aware, courtesy of @VMDoug that there was a new Beta of this product, I downloaded it and installed it and to my surprise look at what I found…. 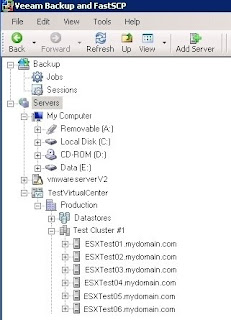 As it turns out, that VM that was going to take 5 hours to transfer was done and dusted in 45 minutes !

Very, Very Impressive, and this is still a beta !

But as Duncan at Yellow Bricks makes clear in his post, this is not necessarily the most secure method of transferring the data, but as I was on the same network and not worried about the security it worked out great !

Go download Veeam Backup and FastSCP from the Veeam site now, every VI admin should have it !

2 thoughts on “Veeam Backup and FastSCP”