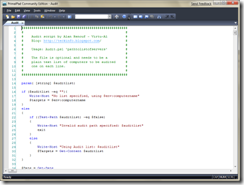 Ever go to a server and need to edit a PowerShell script which you have scheduled to run on a daily basis but only have notepad installed to edit it, yes it can be done but its not nice, is it ?

Sapien have released a FREE thumb drive app which is stored as a single EXE, this editor allows you to edit your scripts in the code highlighted environment we all love, step away from notepad and into the future.

This app also has code highlighting features for the following scripting languages: