I thought I would help people learn the VI Toolkit whilst also creating a nice script which you can customise to your own environment, hopefully this is a script that will save you time in the future.

The script we are going to build together in step by step instructions is a Customisation script.

You have built your host and now have to go through the configuration and tweaks of all the after-build areas, you have to make sure that these are setup the same on each host so that things like VMotion and DRS work so what better than a script to help us limit the amount of mistakes when typing names or missing steps.

Imagine you have built your host, what customisations do you apply to it ? Please let me know and I will make sure I cover it in these lessons so that people can include it in there build script and save everyone time.  Please leave a comment with your suggestions.

We all know time is important, without time things stop working, more than a couple of minutes out can cause major issues so the first thing we do just after building our host is to setup the NTP server.

You could log into Virtual Center, click on the new host and select the configuration, Time Configuration selection remove the default setting for ‘127.127.1.0’ and add your own time source but we don’t want to do that because we want to script it.

First lets store our server name in a variable:

Now we have this stored lets remove the default NTP Server from that host:

After this we can add our new NTP Server: 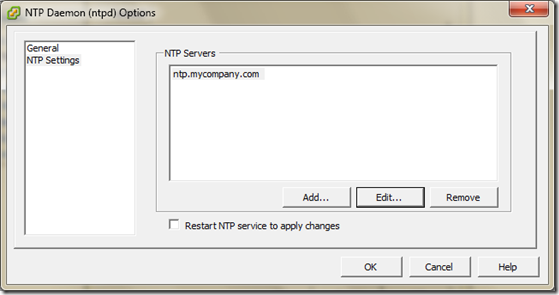 So we now have a ntp server added, wow that didn’t save much time, but wait till we build this script up to add in our networks, configure precise settings etc, then we will have an extra 30 mins lunch break whilst our script does the work !

Our Script So Far: