You may have heard me talk about Webcommander before at VMworld or during a vBrownbag, if you haven’t and you don’t know about this project then you have been missing out!

WebCommander was designed as a framework to wrap your PowerShell and/or PowerCLI scripts into an easy-to-access web service, give each script a nice easy web form and show the results, give a simple icon on a web page to your end users and allow them to use your scripts and all they need is a web browser!

Have you ever wanted to give your users access to certain virtual infrastructure tasks instead of the entire vCenter Client? Have you ever written tasks in PowerShell which you wished you could easily hand off to the users to run on an ad-hoc basis? Now you can hand off the tasks your users need by simply adding a new script and giving them access to WebCommander.

Previously WebCommander was initially released as a VMware fling and updates were performed by VMware, the community was keen to jump on this and the feedback came in thick and fast, I was amazed to see how some customers were using WebCommander and how they took it to the next level.  The main engineer on the project (Jerry Liu) implemented the feedback fast and released update after update to bring the additions to the latest version.

The final part of this story and the great part is that Jerry has now released WebCommander to the community as an open source project on Github, this is fantastic news as it means more people can now get involved, add new contributions and make changes which can be checked back into the core code for everyone to use.  PowerCLI and PowerShell users alike.

So why wait, head over to the site here, download and contribute to this awesome project! 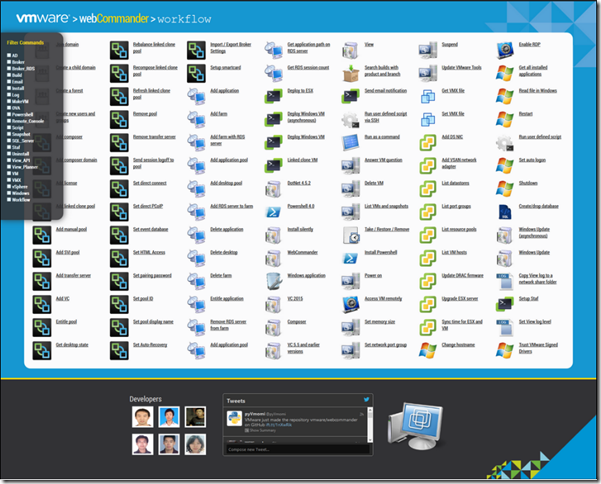