I have spoken about VESI and PowerGUI a few times on the blog now so you should know all about these FREE little gems, one thing that I like about them is the way you can create your own PowerPack.

A PowerPack is basically a collection of scripts and actions and cmdlets all bundled together in shiny wrapping paper and passed back into the GUI for you to harness the power of Powershell without even realising it.

As you can see from the PowerGUI site there is a PowerPack for almost everything you would like to manage and if there isn’t one there then you could either put one together yourself or leave a message on their site planting the idea in their brains. 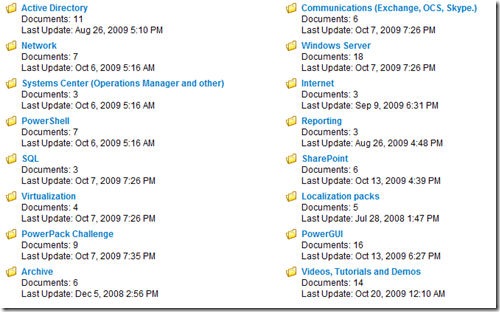 So what do you do once you have downloaded the PowerPack ?

This is the same for both PowerGUI and VESI so I wont bother showing you the screenshots for both, the only difference is the automatic updates of PowerPack’s which I will Show you in a moment.

Now you have downloaded the PowerPack you should have a .PowerPack file, so from within the console you can click the File Menu and then PowerPack Management to open the below screen… 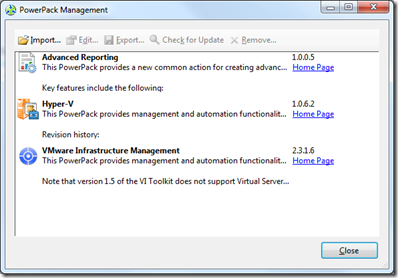 From here you can see any PowerPack’s already added to the console and also import new PowerPack files, so to import a new PowerPack click the Import button…

Select the PowerPack you want to import, notice the description on the right hand side and any snapins that are required by this plug-in.. 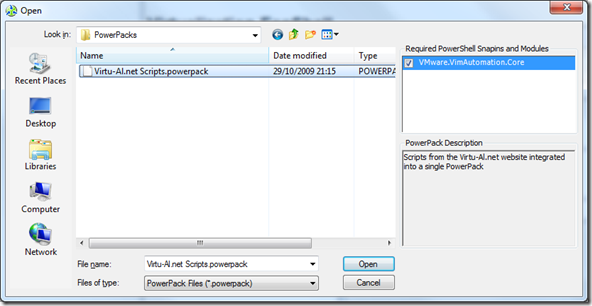 Once selected and opened the PowerPack will be imported and will appear in your ‘PowerPack Management screen’ if you click close you will see that the PowerPack appears as an extra node in your MMC like structure with all nodes and folders underneath it to perform various actions.

Whilst we are in the PowerPack Management section the astute of you may have noticed the “Check for Update” button, this is a very cool function which allows authors to publish their Power Pack’s to a web location and allow you to download the latest version without having to always import the latest version.

Its as simple as that !

Now this is where PowerGUI changes slightly as they have taken this one step further and now automatically check for updates when the console is open, a very cool feature which I hope will be replicated in the near future in VESI.

I am very nearly there, I am just adding some more nodes and tidying things up and then the first release will be available, until then here is a little spoiler as to what is in there already. 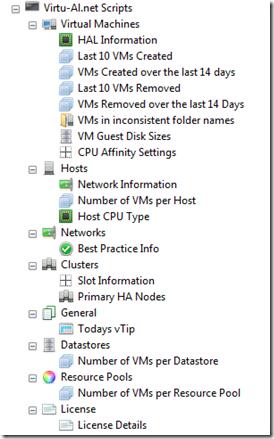