This may not be news to some of you as I have mentioned it at both the Dutch VMUG and the London VMUG but anyway, if you were not lucky enough to make it to these because you live in a far away place then please read on…

The Virtu-Al PowerPack is no more – gone, dead and buried – RIP

However, the “VMware Community PowerPack” has arrived ! Yes it is a rename but also there is new content and a whole lot more to come, to give this the justice it needs I have created a landing page for the PowerPack at the top of my site under featured scripts or click here.

On the landing page you can see how to download it, a video showing how to install it and also how you can get involved in making it even more useful – Come on people we are all managing the same VMware software here !

Don’t worry if you don’t have scripting skills, you can still get involved ! 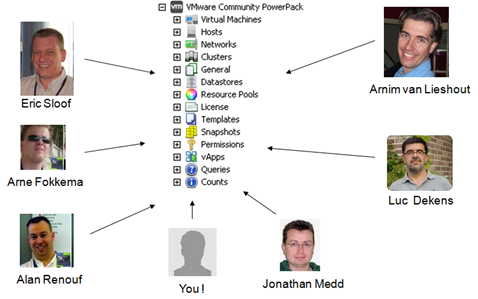 Head over to the landing page http://www.virtu-al.net/featured-scripts/vmware-powerpack/ and check out the “VMware Community PowerPack” now !