The popularity of this PowerPack never ceases to amaze me, as if it wasn’t enough to have more than 2500 downloads already it was also mentioned by the great Eric Sloof at the recent Dutch VMUG, check out a video of the session here (if you speak Dutch) or check out his slide deck here.

So, I have been working on V3 of the PowerPack and have just finished the final touches.

To be honest I cant remember everything that is new but as you can see from the left hand node list there are a fair few new nodes which may help in your day to day admin life.

I have not only added my own enhancements but also included a bunch of bug fixes, (thanks Arnim and Luc) and also included some other scripts from Arne over at ICT-Freak.nl

I have re-organised some of the nodes so when you add the latest PowerPack you will receive a prompt like the below: 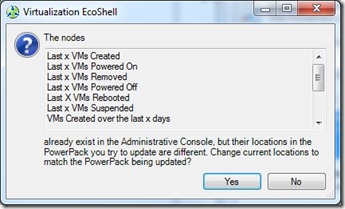 Make sure you click yes to re-organise the nodes into the new areas.

I have also made a dependency on PowerCLI V4.0 Update 1 so if you do not have that version installed then please install it before upgrading to the latest PowerPack, you will not need vSphere 4.0 U1 as PowerCLI 4.0U1 is backward compatable.

In the latest version of PowerCLI VMware have made the connection methods a million times better, if you look at the code you will now see how easy it is to paste your new code into the nodes and create your own enhancements.

So what’s next for V4 ?  More of the same great scripts, more enhanced nodes, a move towards more actions and less nodes, and I am also thinking about opening this up as a community project, we can all add our own scripts to the PowerPack as a community effort and make this THE ULTIMATE FREE TOOL to have when administering or consulting VMware systems, express your interest via the comments please.

If your not a scripter but would like to see something in the PowerPack to make your life easier also please let me know via the comments.

Use the automatic update feature or download the new version now from below.